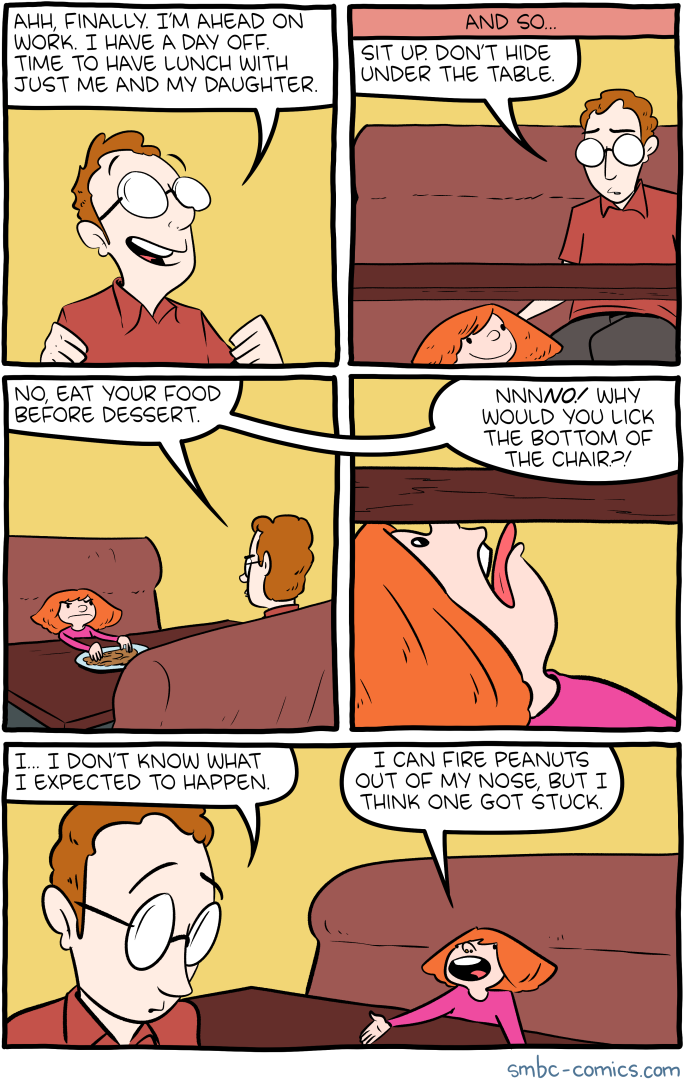 Hovertext:
This is the closest to autiobiography I will ever get

So true, and yet I wouldn't trade it for the world.
Washington, District of Columbia

A lot of the advice you see about management is bullshit. For example, I recently read some post, probably on some pretentious site like medium.com, about how you shouldn't send emails late as night if you're a manager because it sends the wrong message to your people. It creates the impression that your people should be working all the time and destroys the idea of work-life balance.

For some reason, this piece of management advice made me angry. Let me describe my team. I have one person in San Francisco, two in Canada, one in Sweden, one in Copenhagen, a couple in Ohio, one in Australia, and I live in Washington. So pray tell me, when exactly can I send an email that won't be received by someone out of "normal" working hours?

I believe the advice is well meaning, but it's severely out of date with how distributed modern teams work today. I also think it mythologizes managers. It creates this mindset that managers wield some magical power in the actions they take.

True, there's an implicit power structure at work between managers and those they manage. But healthy organizations understand that managers are servant leaders. They serve the needs of the team. Managers are not a special class of people. They are beautifully flawed like the rest of us. I sometimes have too much to drink and write tirades like this. Sometimes I get caught up in work and am short with my spouse or children. I say things I don't mean at work because I'm angry or tired. We have to recognize management as a role, not a status.

The point is, rather than rely on these "rules" of business conduct, we'd be better served by building real trust amongst members of a team. My team understands that I might send an email at night not because I expect a response at night. It's not because I expect people to work night and day. No, it's because I understand we all work in different time zones. They know that I sometimes work at night because I took two hours out during the middle of the day to play soccer. And I understand they'll respond to my emails when they're damn good and ready to.

Madness setting in once more... Symmetry Magazine did a nice article about me and BAHFest.

I just realized why Evernote is an elephant. *facepalm* Thought it was a random animal, in the fashion of O'Reilly books.
Manila

jlvanderzwan
reply
This is played as a joke, but I vaguely recall (hah) that retrieval is the bigger hurdle in memory, not actually storing memories.

Wait 5 more years and this technology will be ready...
Berlin

First some tweets, and then some commentary.

Today's dipshit tweet about me: "someday not far off we will recategorize these left wing scalzi-faced beta pseudo-men as a third gender"

I'LL GET MY OWN GENDER, PEOPLE. I don't know, that seems kinda awesome.

@scalzi For the Scalzi Gender Pronoun I nominate "Whee," and "Whim." As in, "Look at whim, rockin' at the party" and "Whee is cool!"

@scalzi I tell ya, our 3rd gender bathrooms are going to be a hell of a lot cleaner too.

Mind you, there's already more than two genders. So "Scalzi" would be an "n"th gender. BUT STILL LOOK MY VERY OWN GENDER

@scalzi Gosh. Even the MRA types are trying to dismantle the gender binary.

The rules for the Scalzi Gender: Hey, wanna be Scalzine? Come on in! We've got pie!

The Scalzi Gender will accept you regardless of your position on pie, however (or cake, or bacon, or pineapple, or churros).

What is the sexuality of the Scalzi Gender? It varies, of course, but I'd say the most prominent is "Consenting whoo-hoo!"

I'll have to stop being a beta/gamma male, I guess. Does that make me the Alpha Scalzi? No, because that Greek alphabet shit is ridiculous.

There’s something both telling and sad about the sort of dude who literally thinks thata) impugning my masculinity is the worst possible thing they can say about me, b) that it’ll somehow lessen me if they do. On the former, meh. Given the ridiculous ideas that they have regarding masculinity, I’m happy not to meet their definition. On the latter, whatever. They’re idiots. I’m not inclined to care, outside of the opportunities it provides for pointing and laughing.

But I do think it’s useful to publicly mock their stupidity on such subjects, for the amusement and edification of others. I also think it’s particularly useful to mock their definition of masculinity and gender, and their baseline assertion that being male is the apotheosis of the human condition. It’s not; it’s merely one way to be. I’m okay with gender being more than binary; I’m okay with people having a gender other than mine; I’m okay with people shifting their idea of what their gender is over time. Because I don’t think one’s essential value is rooted in gender, and someone else’s gender is nearly always not my business anyway. I am for people being who they are, not who anyone else wants them to be, or demands them to be for their own selfish reasons. I’m for letting the world know that I think such a position is the most correct one to have. I’m for calling out people who try to make difficult for those who don’t conform to their own, usually bigoted, expectations.

Want to declare that because I don’t meet your pointless and stupid definition of “masculinity,” I should identify as another gender entirely? Awesome. I get to create a gender that doesn’t have your jackassedness riddling it front to back. The folks in my gender won’t be focused on being a “real man” or a “real woman” but on being “really me.” My gender will have all the best parties because we can do what we want, free of gender expectations! Because there are no gender expectations! My gender gets to love whoever they want! My gender gets to be whoever they want! My gender doesn’t care what you think my gender should be! My gender rocks. And it doesn’t need you, or care what you think of it.

If only it were as easy for people of every gender to be as free in theirs as I am in mine. Because of course that’s the thing: Even when these idiots declare me “not a real man,” it doesn’t change that I am always seen to be a “real man,” and that I get all the benefits that accrue to me for being biologically male, identifying as a man, and conforming to social standards for what both of those mean. These worst these dudes can do is be mean to me on the Internet. It doesn’t change anything about what I get from the world. And while I can mock them for it and proclaim the new Scalzi Gender in all its awesomeness, let’s just say that I know that it’s easy for me to do so, because in the end society has my back. Not everyone else gets to say the same. We need to be working on that.

jprodgers
reply
"Even when these idiots declare me “not a real man,” it doesn’t change that I am always seen to be a “real man,” and that I get all the benefits that accrue to me for being biologically male, identifying as a man, and conforming to social standards for what both of those mean." - I've had so many conversations about gender and privilege recently. Scalzi nails it.
Somerville, MA

I gotta say, whee and whim are awesome pronoun choices.

Researchers Reconstruct Speech Recorded in the Vibrations of a Potato Chip Bag. No, Seriously. by James Temple
Monday August 4th, 2014 at 7:58 PM

Researchers have figured out how to turn everyday objects into “visual microphones,” by developing a software algorithm that can translate vibrations picked up on high-speed video into the sounds that caused them.

It works even when the motion can’t be detected by the naked eye. In fact, the team from Adobe, Microsoft and MIT was able to reconstruct words uttered on the opposite side of soundproof glass from the vibrations of a potato chip bag near the speaker.

From the vibrations. Of a potato chip bag!

See it to believe it in the video below or read the full story from the MIT news office.